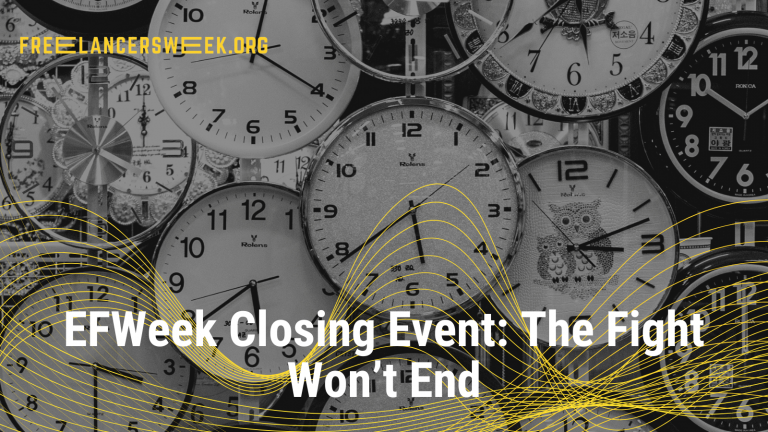 The annual European Freelancers Week (#EFWeek) has concluded but our fight for freelancers to have access to basic civil rights is far from over.

#EFWeek concluded the end of October 2021 with a successful event where Elina Jutelyte, from the Freelance Business Community, and  Jeannine van der Linden, Director of the European Coworking Assembly spoke to Ed Goodman, Founder of Freelance Heroes.

If you were unable to join our event – we are happy to share some of the key insights with you:

Elina spoke about the legacy that she has envisioned for #EFWeek. “#EFWeek combines together organisations, freelancers, and anyone who is active in the freelancing ecosystem to discuss what they are doing, the issues they are facing and the opportunities they encounter.”

To her, it sits near with what she believes in and that she feels this movement should be supported, and that is why she will keep using the Business Freelance Month’s resources to support the movement. She also sees the value of a freelancer community and wants to lend support to ensure that it grows at a good pace.

Jeannine mentioned that “one of the things that has become clearer to us through the years, especially the past two years, has been that no one is coming to save us, we’re going to have to save ourselves.”

That is why the theme of the 2021 #EFWeek was a call for collective action. With her background in coworking, she pulls some similarities to the freelance and coworking communities. “A similar path that was triggered by coworking can now be seen in the freelance sector. For many years we (coworking spaces) weren’t part of the conversation except among ourselves, because we did not speak with one voice.

“The path of creating an assembly for that purpose is the path that we see in terms of freelancers, because among freelancers at this moment don’t really realize that they share similar issues. There are even some in the community who don’t consider themselves to be freelancers,” says Jeannine.

Jeannine believes that one of the reasons why some freelancers try to stay away from the term is because in a large part of Europe, it means that the person is unemployed. So, a stigma is created around the term and independent workers distance themselves from it.

Elina agrees with her and says that she went through the same dilemma when she started out as an independent worker. “I preferred not to be called a freelancer, because to me it had the connotation of being called unskilled. So, I preferred the term consultant to make me sound more skilled. Once we started developing the Freelance Business Community, I realised that we have to talk about freelancers as high level experts and well educated and skilled professionals.”

Technical terms aside, one major aspect that the freelance community is in desperate need of is for countries to recognise what they add to the local economies. Freelancers are the one group of people who can be freely discriminated against, because our notions of human rights at work are based on the idea of employment.

Freelancers are not unemployed, but they also don’t require or want the same rights as permanent employees do. They are their own people. As a community, our voices should be collectively used to make governments aware of the dire situation.

That is why #EFWeek has put together a manifesto to bring focus to the need for governments, businesses, and other stakeholders in the European economy to implement change into the working conditions for freelancers.

It is important that policy be made, contracts created, and the work be done to incorporate the innovative approaches and solutions being developed every day to the rapid changes we are facing – and much of this work is being initiated and developed by the millions of freelancers in Europe.

While Independent professionals experience a lack of benefits compared to their working counterparts, this challenge is an unprecedented opportunity to build back better, to speak with one voice about what we want to bring forward with us into the future and what we think is best left in the dust of the path.
Read the #EFWeek manifesto, and join us in the movement to show governments, businesses, and stakeholders where change should be made.