Research Shows the Future for Freelancers 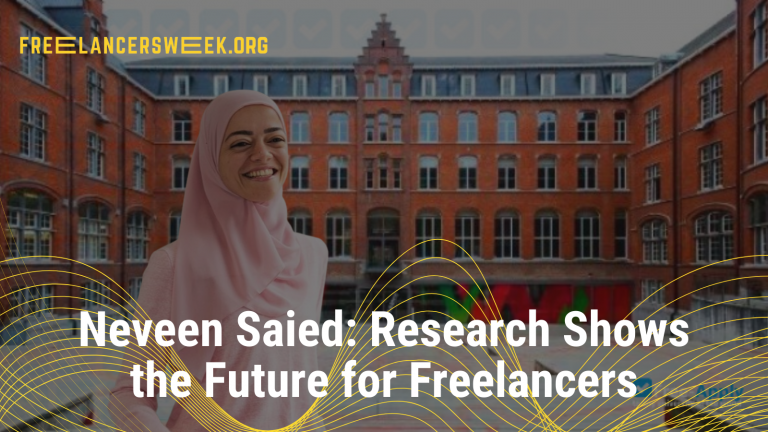 Neveen Saied, a Ph.D. Researcher and Online MBA Tutor at Vlerick Business School focused her studies on the experiences of freelancers, or independent consultants.

She has been doing research on this topic for two years. Her studies focus on how freelancers can proactively create resources – such as behaviours and cognitive capabilities that could help them survive and thrive in the gig economy.

Another focus of the research is how clients can contribute to the survival of workers in developing those resources.

Neveen invites freelancers to participate in a survey that she is currently conducting.

Before she started researching for her Ph.D., she also had a professional background. She worked on projects with freelancers with the objective of supporting their empowerment and their well-being.

Why is studying the experiences of freelancers important to you?

Having been working on some projects and government initiatives that targeted helping freelancers, I personally feel that we need more people to work on this.

For instance, with permanent employees, most of the time the employer may hire researchers, or introduce some initiatives or interventions to specifically empower or enhance the well-being of employees.

Of course, there are many great thinkers and great scholars working on this, but there are not many when compared to scholars studying the experiences of people working in traditional work arrangements. So, I hope I will be part of this in the future.

What have been the key findings in your research so far?

I am still doing research on this topic, but so far one of the main things that we found that stood out to us was that freelancers strive to build work boundaries as much as they build connections with their clients. Freelancers are usually known for being lonely or working in isolation. They are positioned, in literature and media, as lonely individuals who seek to develop connections all the time.

That’s true to a great extent because it is important for freelancers to continuously develop connections to maintain their work but also to enhance their well-being. On the other hand, we interestingly found that freelancers also actively strive to keep a distance and develop work boundaries.

Freelancers build connections with people, and even places and routines, with the purpose to help stay productive and to also be able to thrive in the gig economy.

We found that boundaries – in terms of how, where, and when freelancers do their work – are just as important for them, in order to survive and thrive in the gig economy.

For example, a freelancer I interviewed for my research told me that he usually keeps his distance from his clients because he doesn’t want to be emotionally attached. After working for some time with clients an attachment might develop, sometimes to the workplace, or the people, or the cause of the project.

He interestingly mentioned that this is important for him because the transition process to a new client might be difficult or even painful.

A freelance journalist that I spoke to told me that she assesses her clients on the same level as they assess her before accepting any assignments. This ensures that those clients would also respect her boundaries and enable her to work in the best possible way.

This information is interesting, because most of the time when we think of freelancers, we think that they might accept work opportunities to secure income and that they might not have power. But what we’ve seen in the stories of the freelancers that we’re working with is different.

Experienced freelancers are proactive, they have a voice that they make use of, and they can make a difference. Most of them think that if a project isn’t working for them, they would rather pass up the opportunity than go through with the work.

How will the future of work impact the freelance sector?

I think after being hit by a global pandemic, the way organisations and the way people are working is going to change for good. More organisations are relying on workforce flexibility to remain agile and to respond promptly to the changes in the global markets.

It is apparent that freelancing will continue to increase and freelancers may thrive in this new world of work. Numbers don’t lie: freelancers are among the fastest growing group of workers in the European labour market.

Also, some studies report that freelancers, especially those working independently and freely, gain a significant boost to mental health. This means that it is likely that we see more people going for this kind of work in the future.

With the emergence of new technologies, such as artificial intelligence (AI), more organisations need to compete on scarce resources. But acquiring the human resources that could empower the use of this technology might not be affordable, or might not be available for them. Then, freelancing would be one way to go forward as a strategy for scarce talent acquisition, to obtain the knowledge and the skills of people who might not be available otherwise.

Freelancers need to constantly develop their skills and explore different ways of providing services to their clients. There is no alternative to committing to learning to open new work horizons. It might be helpful to make use of collective learning opportunities within the freelance community.

So, I want to give a shout out to events such as the European Freelancers Week (#EFWeek) that provide freelancers with the opportunity to network and exchange experiences.

We’ve seen from prior research that this is the one of the main investments freelancers need to make to thrive in this new world of work. Learning, generally speaking, has become an essential part of anyone’s career development, but even more so for freelancers. Freelancers need to cultivate the mentality and flexibility to learn—even though it is not always that easy.

Staying still will not lead to success and especially for freelancers in the long term. Learning is a key component that should be highlighted as well as proactive skills development—all of those elements are truly important for the progress of freelancers—in their careers and lives.

What advice would you give to organisations?

Investing in workforce flexibility is not a luxury anymore and should be a key strategic priority for organisations. Now, this means that using an external workforce, such as freelancers, is a way to remain agile and competitive in the global market. As such, freelancers should be viewed as a strategic asset that organisations invest in.

Organisations should think about how they can integrate freelancers, how they onboard them to make their life a little bit easier. Because, from a freelancers’ perspective, sometimes it might be a little bit difficult for them to get into the organisational culture or understand some of the basic procedures.

The main thing is that organisations need to view freelancers in a different light. It is important to abandon the idea that hiring a freelancer is an easy way to get another employee without having to train and integrate them or to quickly and inexpensively hire an expert. Freelancers need to be seen as part of the team of the organisation.

This for sure doesn’t mean that organisations need to provide freelancers with the same exact benefits of traditional employment. But by doing things as simple as giving them feedback or trying to make things like the onboarding and existing processes smoother, could really help and could push future collaboration forward.