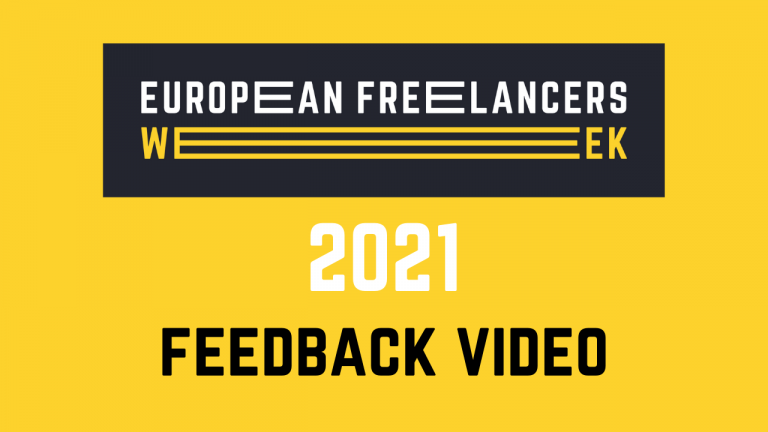 The sixth annual European Freelancers Week (#EFWeek) concluded on 24 October 2021. Since then we have collected some feedback from our attendees, organisers, and our presenters.

The European Freelancers Week was created to help freelancers join together so their voices could be heard. Freelancers in Europe don’t have access to basic civil rights, and – though no one thinks of it this way they can be freely discriminated against without any legal or social consequences.

#EFWeek aims to bring focus to the need for governments, businesses, and other stakeholders in the European economy to grapple actively with the changing face of work. It is important that policy be made, contracts created, and the work be done to incorporate the innovative approaches and solutions being developed every day to the rapid changes we are facing – and much of this work is being initiated and developed by the millions of freelancers in Europe.

Here is what our attendees and event organisers had to say about #EFWeek2021:

Adrian Ashton says that “freelancing currently is a huge melting pot of opportunity, because of structural changes to industry and employment and marketplaces walked by COVID. And that’s probably going to continue for the next few years at least. But in the short term future, it’s [exciting times] for a lot of us because we’re facing disproportionate tax hikes being introduced by the UK Government. And all of the grant support that any of us received through COVID is now at risk of being called back.”

Anna Hallisey, a freelance copywriter, found that at the moment the demand for freelance services is soaring. “And I’ve had more new clients this month than the whole year. I think that we are going to move to a future where companies use freelancers more and more to get exactly the skills that they need.”

Carla, seen with a baby in her arms, says that “this is the current state of freelancing, it enables me to be flexible and work around my new family. I can only imagine that there are going to be more and more freelancers in the future. I think people are enjoying the opportunity to be their own boss, to create their own culture to decide when they want to work and who they want to work with. And to just make sure that what they do fits in with their family.”

Elina Jutelyte, the founder of Freelance Business Community, says that what she likes most about #EFWeek is that “it combines together organisations, freelancers, anyone who is active in the freelancing ecosystem, to actually come together, discuss what they are doing, what are the issues and opportunities most of all, and how they can support the freelance economy.”

An attendee of the #EFWeek said that she learned about #EFWeek through Freelance Business Month and she believes that “this initiative is so important since it supports freelancers from all over Europe. I’m really looking forward to next year’s edition.”

Rich Flynn, owner of Wizard Works, says that “presently I think the state of freelancing is really good. I think what’s happened over the last two years, it’s given people the opportunity to start their own business. People like myself that have been freelancing for a few years, give me the opportunity to reevaluate how I’m working and what I’m doing. And I think as the freelancing [sector] grows going forward, I think there’s going to be more support for everybody. So I think it’s really good.”

Rachel says that she’s excited about #EFWeek and that “freelancing to me is being able to work anywhere in the world, and also having autonomy to decide what sort of clients you want to work with, and whether their values match yours.”

Sarah, business owner of White Idea, is a freelance copywriter and social media manager. She thinks that “through lockdown, a lot of people turned to freelancing as something to supplement their money coming in, which I think is amazing. I’ve certainly helped a few businesses get up and running off the ground themselves. The future freelancing, I think, is only going to get more and more popular. I think more freelancers will emerge, and I’m happy to support them.”

Sarah Townsend, a freelance marketing copywriter, and editor, says that “I feel like now is a really positive time to be freelance. There are a lot of new people becoming self-employed for the first time as the world sort of evolves after COVID. There’s a lot for them to appreciate. I think there are some incredible events going on out there. There appears to be a lot of investment in innovation of various different platforms, and some of the communities that exist for freelancers to support and to gain reassurance and advice are absolutely fantastic. In terms of the future outlook, I also think that’s really positive. I think newly lean businesses are kind of waking up to the benefits of hiring flexible labour.”

Overall #EFWeek received positive feedback. There are no plans to stop the movement, and in the background, we are already planning and arranging #EFWeek2022. To keep track of what we are doing, sign up for our newsletter to stay in the loop about all things freelance in Europe.