Freelance Business Community on Being a Partner with #EFWeek 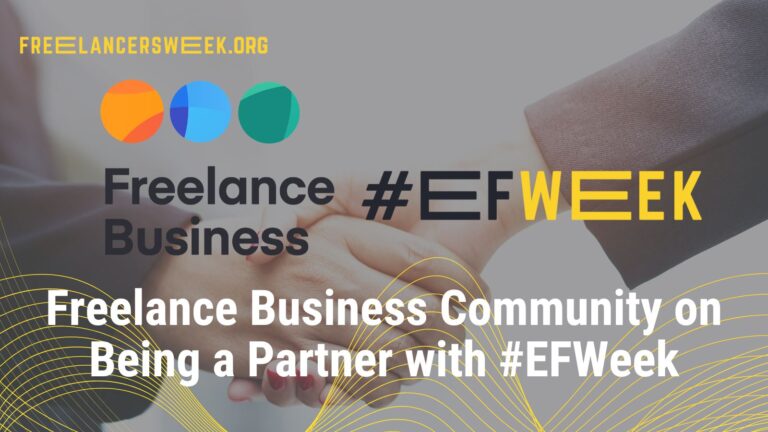 Elina started Freelance Business Community four years ago in the Belgian market, and has since gone international. “It was our ambition to grow to an international organisation and give the opportunities to freelancers worldwide to connect and learn new skills,” explains Elina.

She believes that education and knowledge sharing is important, “especially when you’re solo,” she adds. But, there is a problem with accessibility with webinars and events for freelancers, explains Elina. These events tend to be expensive and not all freelancers can afford them.

“At the same time,” Elina says “we have our mission to connect not only freelancers with freelancers, but also, those who are hiring freelancers. As well as those who provide services and products to freelancers, be it platforms, be it coaches, for instance, or anyone who is marketing freelancers as their potential clients”, explains Elina.

“It’s important because the freelance economy is growing quickly. There are lots of changes happening, and we’re trying to educate the community in general.”

Freelance Business Month gives freelancers the opportunity to learn about the current trends and important aspects they need to know about the freelancing sector. These events encapsulate all three categories: freelancers, those who hire freelancers and those who offer products or services to freelancers.

Some aspects of the freelance sector aren’t obvious, that is why Freelance Business Community teams up with organisations, globally, to provide the right information to freelancers.

The partnership with #EFWeek happened naturally, explains Elina. “I had a conversation with Jeannine van der Linden about #EFWeek and how the Freelance Business Community would be able to support the initiative.”

Elina explains that even if she did not end up partnering with #EFWeek that she would have supported the week-long events purely because she sees the value in having an opportunity like this. “I like the idea of looking after freelancers’ rights in Europe, because I know it’s not the same in other countries. Here in Belgium, for instance, we are quite protected, but pay quite hefty taxes too,” says Elina.

But it’s not the case in other countries. “There are still some grey areas that we can work together to make it better for freelancers,” says Elina.

Elina explains that the instantaneous positive energy between Freelance Business Month and #EFWeek has led to a positive relationship. She explains that finding people to host events that discuss themes – like the rights of freelancers – becomes a political and governmental discussion, so the right people are needed to speak about these policy issues.

The country has a big influence in how the freelance economy is perceived. “Determining in which department freelancer rights falls under, depends on whether the country sees the potential of the freelance community,” explains Elina.

“So we are paving our path towards those people to eventually build up these key opinion leaders who think the government’s to bring their part to strengthen the freelance economy.”

Elina explains that the #EFWeek x Freelance Business Month relationship is quite significant, not just for the parties involved but also towards freelancers. “By adding our forces together we can ensure that freelancers have access to the social policies they need,” says Elina.

Elina says that the relationship also means a lot to Freelance Business Month as being associated with a global group like #EFWeek has helped to answer many unanswered questions.

“If we look much broader than just the daily job of freelancers, and see how we can actually influence their lives, it becomes more significant to be associated with #EFWeek.” Elina says that the partnership is beneficial to freelancers as well. This is because the combined forces of #EFWeek and Freelance Business Community can open many new doors and faster find solutions to the lack of basic civil rights, and other issues that freelancers may experience.

In the end #EFWeek gives freelancers the opportunity to voice their opinions in a space that is secure. It also allows them to share their knowledge with one another.

“Ultimately the relationship with #EFWeek has given me access to key people to raise and address the issues that freelancers face,” says Elina.

The 2022 theme for #EFWeek is: We are the drivers of the economy. “When discussing the theme, we had many options and eventually asked the public to choose the theme that best resonates with them for this year,” explains Elina.

Elina says that “there should be a message stressing the fact that freelancers are not secondary. They aren’t people who are in the market simply because they could not find a job. In almost all of the cases, being a freelancer was a life choice. And, freelancers stimulate the economy and contribute a large amount towards it.”

Even though the amount contributed to the economy by freelancers is quite extensive, it isn’t acknowledged in many cases. In fact, the contribution from intelligence workers, or white collar freelancers are not even calculated separately from other gig workers. In Belgium for example (and so is in many other countries), the self-employed category includes agriculture and fishery workers, small trades like shops and bakeries etc and the data that comes from measuring this group is not very accurate if we want to analyse the white collar freelancers only.

“Freelancers not only contribute to the economy directly, they also create jobs for others if they work with someone else,” says Elina.

Being a freelancer means creating a job for yourself, explains Elina. That is why the contributions of freelancers are so important to the economy. And, it is time that governments start recognising  this contribution .

Sign up to attend or host events with #EFWeek and be part of the large driver to showcase the value that the freelance community brings to the European economy.