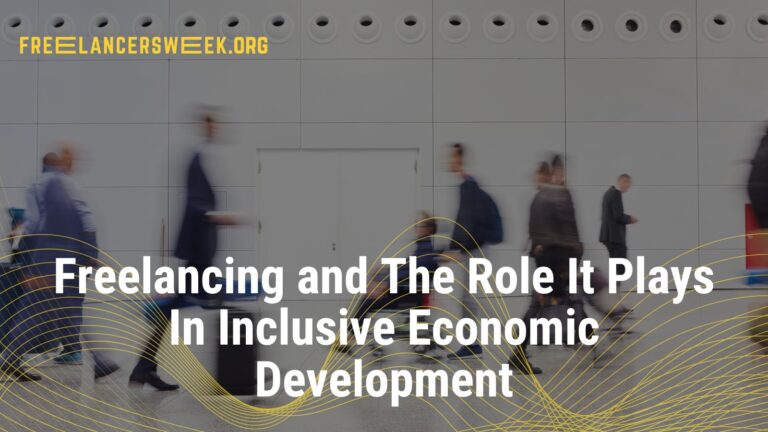 Freelancing has benefits, not just to the freelancer themselves, but also to the community that they trade in. Freelancing contributes a fair bit of fund and job creation to the economy, making it a role that is versatile and beneficial.

Inclusive economic development focuses on growing the economy fairly, it aims for the creation and fair distribution of opportunities for everyone.

The idea focuses on the poorest social strata’s needs, and takes those into account. There is a direct contrast between IED and the idea of the “trickle down” effect that many societies believe to be beneficial for the impoverished. Though, in reality it simply keeps them in an impoverished state, and IED is dedicated to eradicate poverty within a society and the overall economy.

The vocal point of IED is mainly: stability, equity, and growth. Inclusive economic development is dedicated to bettering the conditions of each individual by improving their living standards, which can be done through the above three elements.

Here is how stability, equity, and growth helps an economy to be more inclusive:

Stability for a region

When a region is stable, it creates better opportunities for investments to be made and promotes businesses and individuals to fund these regions as they feel secure in making self investments. Once a region gains more investments and funds, it is able to grow and help those who are impoverished.

Though, for a region to become stable, it has to have its growth and politics underwraps. It becomes a challenge for regions to become stable due to the amount of input that is needed from each individual within the region.

That is why a strong community is needed for a region to become stable and attract more investors to the scene.

Equity is a way of ensuring that everyone is treated equally, based on them as an individual, not based on what society deems as fair.

This means that amenities such as healthcare, water and sanitation, and electricity will be accessible to all members of the community.

The freelancing sector is a great example of not having access to basic civil rights. Freelancers don’t have access to healthcare and retirement funds the way traditions employees have. In fact, they can be discriminated against without any consequences. This means it is up to them to raise this issue with policy makers and ensure that their needs are met.

A lot can be learned from freelancers when it comes to creating an inclusive and equitable community.

This is where freelancers are beneficial to the community. They stimulate growth through bringing in funds that have been collected from outside of their community.

An additional point for growth is that inclusive economic development will promote the product of goods and services for all classes of people, making it so that everyone’s needs are being met.

Meaning that products aren’t created just for the higher-end market. It is created and advertised to anyone within the community. When everyone is able to contribute to the growth, it will escalate faster and more gradually.

What role does freelancing play?

As the great resignation has impacted Europe, by making more employees leave their careers for better job satisfaction or other job opportunities, freelancing is one of the career paths employees have turned to. Freelancing allows individuals to offer their specialised skills to a variety of different companies, as well as promotes the development of soft skills.

The role freelancing plays in inclusive economic development lies in its benefits. One of the aspects of freelancing that attracts employees to the field is how it promotes the development of skills.

When a freelancer wants to work at different companies they will most likely have to meet different requirements. Usually they would take different courses to meet these requirements however when living in a poorer community taking courses is not always a viable option for households.

One way the freelancing community can empower and provide equal opportunities to freelancers from poorer areas is by mentoring them. Being a mentor allows freelancers who are familiar with the field to offer support and guidance to up-and-coming freelancers. These mentorships can help improve the economic situation for different regions.

This is because when a community is filled with people who are able to sell their skills, it brings in funds faster that grows the overall community at a steady pace. This does not mean that the entire community should be filled with freelancers, but rather that freelancing is painted as more viable option to those who have skills to sell.

In 2020 the European Coworking Assembly ,  stepped in as the coordinators of #EFWeek.