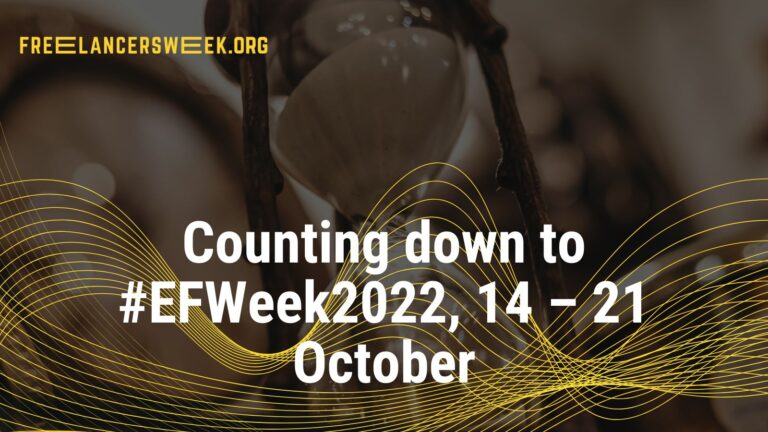 We are in the final stretch to the beginning of the seventh annual European Freelancers Week (#EFWeek), with just 14 days to go.

This year, the theme of #EFWeek2022 is; Freelancers: We are the drivers of the economy.

In a first for #EFWeek, the theme was voted on by the public on social media and newsletter outreach. It forms a fitting banner for this year’s celebration and the positive role freelancers play in inclusive economic development.

An inclusive economy benefits the majority, and not only the mean. It focuses on growing the economy fairly and aims for the creation and equal distribution of opportunities for everyone.

Freelancing plays a fundamental role in promoting inclusive economic development because freelancers lead the way right across Europe in the development of skills and  flexibility within a skillset.

Read more about freelancing and the role it plays in inclusive economic development.

The partnership between us which highlights education, networking, and policy reform for the sometimes forgotten freelancer, created the perfect pair.

In a blog post speaking about the relationship with Elina Jutelyte, founder of Freelance Business Community, she says “by adding our forces together we can ensure that freelancers have access to the social policies they need.”

Jeannine van der Linden, director at the European Coworking Assembly, the coordinators of #EFWeek says, “our work to highlight the role  of freelancers in the European Economy is never done, so working with Freelance Business Community and Elina brings a wonderful synergy for us as for the EFWeek,:..”

Our push for recognition of freelancers in the European economy is spearheaded by the #EFWeek manifesto that aims to:

By adding your name to our manifesto we increase the call for political action. Join us as we take this petition to various government entities and demand change.

For the seventh year in a row, the European Freelancers Week is hosting our own kickoff event on Monday 17 October at 10:15 GMT/ 11:15 CET.

This year, the European Coworking Assembly is piloting the opening ceremony, driven by Tash Thomas, the Director of Diversity, Equity and Inclusion around the newly released ECA IDEA Handbook.

This handbook has been a three-year long vision of the ECA that is finally available in PDF format for a nominal download fee.

If you don’t know yet, IDEA stands for inclusion, diversity, equity and accessibility. It’s a value system that all businesses need to construct as part of their DNA. It promotes healthy business practice and fosters close collaborations with a wider audience. These principles encourage people to bring their whole selves to work every day.

Tash will explain the difference in these values and how they translate in business, with expert advice and actionable ideas in a 30 minute discussion and interactive 15 minute Q & A to conclude the session.

Organisations and people who have anything to do with the freelance industry are welcomed to submit their events to #EFWeek.

Events already planned for the month of October, or planned specifically for #EFWeek needs to be added to this Google Form, where it will then be loaded to the European Freelance Week website, shared on social as well as in our newsletters to our freelance community.

Remember to make use of the save-the-date banners on your socials to remind your followers to attend the session, using these assets.