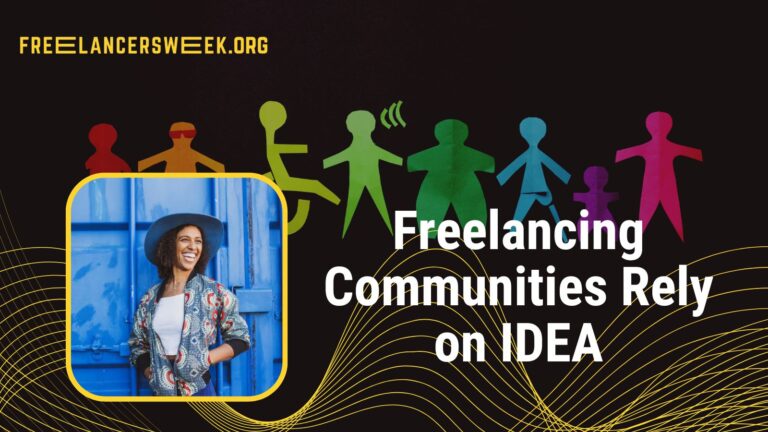 In our #EFWeek2022 kick-off event on Monday 17 October, Tash Thomas, Director of IDEA with the ECA was in conversation with host, Elina Jutelyte, founder of Freelance Business Month, about the freelance community and the role Inclusion, Diversity, Equity and Accessibility (IDEA) play.

Freelancing is a career choice people make based on their needs. Some opted for it because of neuro-diversities like ADHD, or because of location based decisions, or simply feeling like they don’t fit in the traditional nine-to-five box.

Freelancing comes with many perks; work/life balance, work from anywhere, flexible hours, varying project opportunities, and so much more.

But there are also drawbacks to being a freelancer. There is the isolation, being the boss (while it can be a positive, it can also be a big negative), and having to deal with unexpected regulation changes. We’ve covered many times how freelancers are openly discriminated against in the workplace, so how can the concept of IDEA combat this?

Salaried employees are automatically protected in the workplace by HR (human resources) policies and procedures. If an employee feels they’ve been discriminated against there are departments that deal with situations such as these, and more policies are put into place to ensure it doesn’t become a recurring issue.

But those frameworks don’t exist for a freelancer. So, how can freelancers get the protection they deserve?

By becoming part of a freelancing community that at its core, values the principles of IDEA.

Inclusion speaks of our actions.

Diversity highlights that difference is a fact of life, no matter what we identify as, we can celebrate that we are all unique.

Equity means that we understand there are varying identities, and we may need varying adjustments to reach equality.

Not to be confused with equality, as this means we all get equal opportunity. For instance, students are writing a test – they all get the same resources, the same time, the same opportunity – but what if a student is dyslexic? Then that student needs an adjustment to be able to fairly complete their test.

Accessibility deals with much more than just physical access. It starts with the principles of universal design, and goes further to look at operations and communication. “If a coworking community looks a certain way – a certain race, or gender – what kind of barrier to access is it causing?” says Tash.

Another topic that came up in the discussion is the emerging trend of companies hiring cheap labour from places with lower wages to increase their bottom line. This raises the question as to whether a minimum wage standard should be brought in.

But also, a shared responsibility is starting to emerge on freelance platforms, where there is a call to make an effort in ensuring that freelancers are protected and not mistreated.

In addition to this is the disparity between male and female rates experienced in freelancing. This speaks clearly to the bias that women still face in society that men do the better job and therefore get paid the better rate.

Tash notes, “a woman will want to fulfill 90% of the job spec, a man only 40%. My advice to anyone looking to hire, assess your job spec and lay out only what is non-negotiable in your request.”

Invisible Women: Data Bias in a World Designed for Men speaks to just how entrenched this age-old bias is in society and the impact that it has on women.

Freelancers need to rely on their network and not be afraid to ask about rates and what seems fair to charge clients for particular jobs.

“Yes, we are independent and make our own rules, but that doesn’t mean that as a freelance community we can’t have these honest conversations and uplift the industry as a whole.”

It takes collective effort to protect the working situation of freelancers. Coworking spaces, freelance communities and freelance platforms need to unite, welcome dialogue and implement IDEA in how they do business to combat these types of exploitations and build an industry that is sustainable and supportive to all.

For more resources on the topic of IDEA you can pre-order the ECA IDEA Handbook that walks you through IDEA and how to  incorporate it within your business.

In addition to this there is the Coworking IDEA Project that helps further your IDEA journey in fun, bite size monthly challenges.